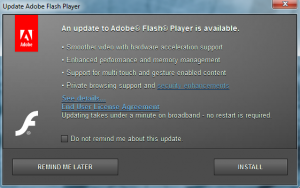 Adobe usually shares Microsoft’s Patch Day, saving their security updates for the second Tuesday of the month. However, today they released a security bulletin one day earlier than expected, announcing a patch that fixes a bunch of critical vulnerabilities in the popular Flash Player application.

Abobe’s bulletin describes 25 security vulnerabilities  (based on CVE numbers) that affect Flash Player running on any platform. It doesn’t describe the flaws in much technical detail, other than mentioning they consist of buffer overflow vulnerabilities and other types of memory corruption flaws. That said, Adobe does warn that if an attacker can entice one of your users to visit a malicious website containing specially crafted Flash content, he could exploit many of these unspecified vulnerabilities to execute code on that user’s computer, with that user’s privileges. If your Windows users have local administrator privileges, an attacker could exploit this flaw to gain full control of their PCs.

Though it doesn’t look like attackers are exploiting these flaws in the wild yet, Adobe rates the flaws as a “Priority 1” issues for Windows users, and recommends you apply the Windows updates within 72 hours. These vulnerabilities also affect other platforms as well, though not as severely. I recommend you update any Flash capable device as soon as you can.

Keep in mind, if you use Google Chrome you’ll have to update it seperately.

If you choose, you can configure the HTTP proxy on your XTM appliance to block Flash content. Keep in mind, doing so blocks all Flash content, whether legitimate or malicious.

Our proxies offer many ways for you to block files and content, including by file extension, MIME type, or by using very specific hexidecimal patterns found in the body of a message – a technique sometimes referred to as Magic Byte detection. Below I list the various ways you can identify various Flash files:

(Keep in mind, not all the Hex and ASCII patterns shared here are appropriate for content blocking. If the pattern is too short, or not unique enough, blocking with them could result in many false positives)

If you decide you want to block Flash files, the links below contain instructions that will help you configure your Firebox proxy’s content blocking features using the file and MIME information listed above.

Adobe has released updates to fix these Flash vulnerabilities.