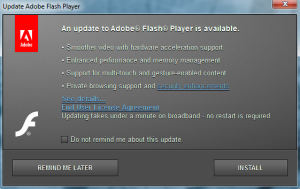 Today, Adobe released an emergency security bulletin to fix two Flash Player vulnerabilities, which attackers are actively exploiting in the wild. Both flaws are memory corruption-related issues; one being a buffer overflow vulnerability. If an attacker can entice one of your users into opening any Flash content, he could exploit either of these flaws to execute code on that user’s computer, with that user’s privileges. If your Windows users have local administrator privileges, an attacker could exploit this flaw to gain full control of their PCs.

As mentioned earlier, attackers are actively exploiting both these vulnerabilities in the wild. Currently, the attackers try to deliver the malicious Flash either via a booby-trapped web site, or by embedding it within malicious Word documents.

Besides patching, we recommend you educate your users about the dangers of interacting with unsolicited Word (or PDF) documents. Many of the more advanced breaches over the last few years have begun as very targeted spear-phishing emails which included malicious Word or PDF documents. Although security appliances, like WatchGuard’s, can detect some of these malicious documents using AV and IPS, you should still inform your employees to remain vigilant against these sorts of attacks.

Keep in mind, if you use Google Chrome you’ll have to update it separately.

If you choose, you can configure the HTTP proxy on your XTM appliance to block Flash content (and Word documents). Keep in mind, doing so blocks all such content, whether legitimate or malicious.

Our proxies offer many ways for you to block files and content, including by file extension, MIME type, or by using very specific hexidecimal patterns found in the body of a message – a technique sometimes referred to as Magic Byte detection. Below I list the various ways you can identify these various files:

(Keep in mind, not all the Hex and ASCII patterns shared here are appropriate for content blocking. If the pattern is too short, or not unique enough, blocking with them could result in many false positives.)

If you decide you want to block these files, the links below contain instructions that will help you configure your XTM proxy’s content blocking features using the file and MIME information listed above.

Adobe has released updates to fix these Flash vulnerabilities.