Though not the biggest on record, today’s Patch Day is no slouch.

As expected, Microsoft released a dozen security bulletins, fixing 57 vulnerabilities that affect a range of their software, including:

According to the summary alert, Microsoft rates five of the bulletins as Critical, which typically means remote attackers can exploit them to gain control of affected computers (usually with little to no user interaction). In general, I recommend you apply these Critical updates first.

In particular, I’d start with the two IE updates since attackers often target users with drive-by download attacks. Also, jump on the Exchange server update immediately, as it fixes an issue attackers could easily exploit with a specially crafted email and attachment—not to mention, your email server is a pretty critical asset.

Though not as serious as other issues, one of Microsoft’s alerts describes a Windows TCP/IP Denial of Service vulnerability, which it sounds like attackers could exploit with a single malicious packet. I haven’t seen this sort of “Ping of Death”-like DoS vulnerability in a while.

As always, I recommend you test the updates before deploying them to a production environment. If you don’t have time or resources to test all of them, at least try to test the server-related updates.

As an aside, WatchGuard’s IPS signature team gets early warning about Patch Day, and will release a new signature update that detects some of the described issues shortly. The have developed signatures for the following Patch Day-related issues: 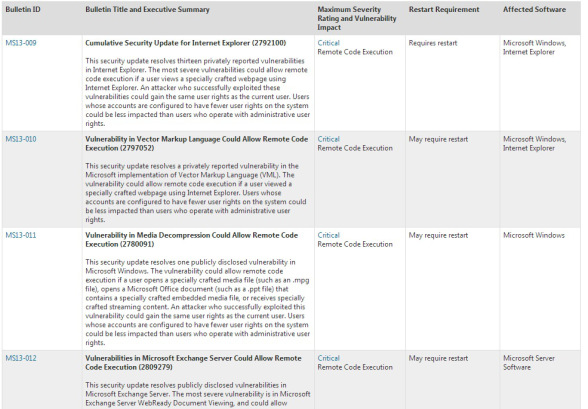